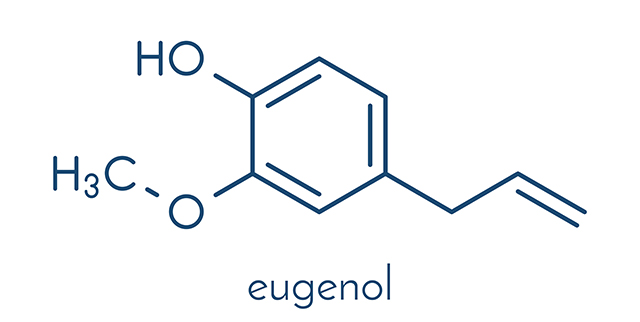 Cloves, which are the dried flower buds of the tropical tree Syzygium aromaticum, have once been used to preserve food rather than season it. Clove oil is made up of around 85 to 90 percent eugenol, which is the compound that makes it possible for cloves to hinder food from spoiling.

Eugenol, which manifests itself as a clear or pale yellow liquid and which owns a strong spicy smell, can also be obtained from cinnamon and other aromatic spices. It is somewhat soluble in water and fully soluble in organic solvents. It is a polyprophrene with the molecular formula C10H12O2, and is known by other names as allylguiacol, caryophillic acid, and eugenic acid.

The world of cosmetics has found in eugenol a fragrant additive and denaturant, and a unique ingredient of aftershave lotions, bath products, moisturizers, shampoos, soaps, and skin and hair products. Eugenol also has its uses as a flavoring agent.

Eugenol should not be taken in excessive amounts as overdose of the compound can cause abdominal pain, blood in cough and urine, burns in mouth and throat, coma, dizziness, nausea, rapid heartbeat, seizures, and shallow and rapid breathing. 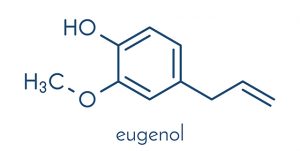 Eugenol is good for the skin. Reports have shown its capability to heal sores and rashes; it may, however, not be put on open wounds.

Eugenol has antioxidant properties. As a very strong fat-soluble antioxidant, it prevents the accumulation of fat peroxide products in red blood cells and keeps the body’s antioxidant enzymes performing at optimum levels. Laboratory studies using animals show that even trace amounts of eugenol can suffice for a significant protective effect because eugenol can be diretcly incorporated into cell membranes, which inhibits lipid peroxidation right in place.

Eugenol has antibacterial properties. In a study that was called “Eugenol (an essential oil of clove) acts as an antibacterial agent against Salmonella typhi by disrupting the cellular membrane”, it was found out that eugenol renders the bacteria completely inactive within 60 minutes of exposure.

Eugenol is good for oral health. It can be used as a local anesthetic for temporary relief from toothache pain. It is used in combination with zinc peroxide to form a filling in root canal treatment.

Eugenol is good for the skin.

Eugenol is good for oral health.