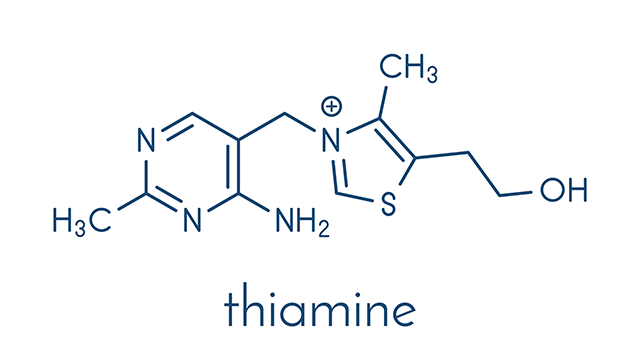 Thiamine, also known as vitamin B1, is an important water-soluble nutrient that is part of the vitamin B complex family, and is in fact the first B-complex vitamin to be discovered. Together with the other B-complex vitamins, thiamine regulates the functions of various body systems and organs. Furthermore, thiamine helps keep the body’s energy levels steady, and contributes to overall healthy metabolism.

The early symptoms of thiamine deficiency are loss of sleep and appetite, lethargy, indigestion, and tenderness in the calf muscles. A thiamine deficiency that has been left untreated will often manifest as beriberi, a disease that comes in two types: wet and dry beriberi. Wet beriberi affects the circulatory system and heart, and includes the symptoms of abnormally fast heart rate, pulmonary edema, and hypotension. Dry beriberi, on the other hand, damages the nerves and muscles and can result in muscle atrophy. Both types of beriberi can be life threatening.

Considerable amounts of thiamine can be found in pork, beef, poultry, and organ meats like kidneys and liver. The plant-based sources of thiamine range from whole-grain cereals to brewer’s yeast to blackstrap molasses. 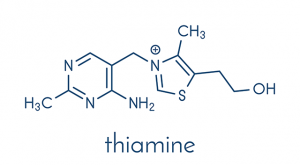 In addition beriberi, sufficient amounts of thiamine can also prevent Wernicke-Korsakoff syndrome, a neurodegenerative disorder caused by the deficiency of this nutrient. Individuals who develop Wernick-Korsakoff typically drink great quantities of alcohol, are malnourished, or fast for prolonged lengths of time. These people will often experience altered mental status, poor balance, involuntary eye movements, and double vision. The muscle coordination and confusion can be improved by high doses of thiamine, but memory loss will more or less remain.

Individuals struggling through alcohol withdrawal can turn to thiamine to help them deal with the symptoms. Supplemental thiamine has also been observed acting as a defensive measure against the metabolic imbalances brought about by excessive alcohol consumption.

Thiamine can decrease the risk of heart disease by contributing to the production of acetylcholine, a neurotransmitter that ensures proper cardiac function by relaying messages to and from the nerves. Moreover, thiamine supplements can boost the heart function of people suffering from congestive heart failure.

A healthy metabolism requires thiamine. This is because thiamine is needed for the body to generate adenosine triphosphate (ATP), which is the molecule that carries energy. Moreover, thiamine facilitates the conversion of carbohydrates into glucose, and helps in the breakdown of fats and proteins.

Thaimine, in combination with other B-complex vitamins, can lessen the chances of developing cataracts and glaucoma.

Thiamine is believed to prevent numerous other health conditions like:

Thiamine is known to assist the immune system by strengthening it and enhancing the body’s ability to endure stressful situations.

The digestive system benefits from thiamine due to its role in the production and secretion of hydrochloric acid, which is necessary for food particles to be completely digested.

Thiamine protects the nerves by keeping the myelin sheaths healthy. These fatty white substances are important to the nervous system because they serve as an insulating and defensive outgrowth for the nerves.

Thiamine is good for the blood since it plays a key role in the production of red blood cells.

Thiamine, or vitamin B1, is a nutrient crucial to overall health. It helps maintain a healthy metabolism, delays the onset of glaucoma and cataracts, and prevents beriberi, Wernicke-Korsakoff syndrome, and heart disease. Thiamine supports and maintains the heart, nervous system, digestive system, and immune system as well. The body is unable to produce thiamine or store it for long, making the frequent consumption of thiamine-rich foods all the more important.