Early records showed that cows may have first been domesticated in 7000 to 8000 B.C. in the region of East Mediterranean around the Tigris and Euphrates rivers; a few years later they were being herded in China, Korea, Mongolia, and northern Africa.

The explorer Christopher Columbus introduced the utilitarian uses of cattle during the second time that he came to North America in 1493. Cows were widely used in the colony of Jamestown by 1611, and European colonists started owning herds of them in the 17th century.

The cow population in the United States amounts to around 100 million; this includes the 60 million which are killed for their meat. Beef consumption in the country came close to around 184 pounds per person per year or half a pound per day in 2004. Ten years later, this number declined to 166 pounds or less than 10 percent.

Beef cows can be classified into different breeds that include Beefmaster, Hereford (Whiteface), Jersey, Texas Longhorn, Angus, Aberdeen Angus, Brahman (Zebu), Santa Gertrudis, and Shorthorn. Cows can either be grain-fed or grass-fed. Some beef products are labeled “grass-fed” even though the cows involved were only “finished”, or were fed with grass during the last to three months before slaughter. 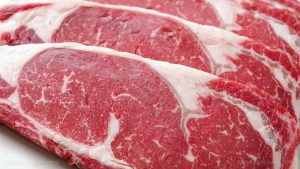 Beef, along with fish and milk products, is known for being a primary source of high-quality protein, which is an essential nutrient for people who are trying to increase or build muscle tissue, like recovering athletes or people who have undergone a major surgery. Another nutrient which is essential for body growth and maintenance is phosphorus, which can also be found in beef.

In line with mass- and muscle-building is the ability to sustain energy to prevent the body from being susceptible to fatigue and to increase the body’s performance during workouts or other strenuous activities. This is where carnosine helps, which is a nutrient that can be obtained by eating beef.

Research says that if you eat the meat of grass-fed cows, it would be more beneficial for you, because these cows have more vitamins and minerals that are usually lacking in cows that eat just grains. These include carotenoids — usually indicated by the yellowish tint in the fat from grass-fed meat after it is cooked — which are precursors to vitamin A.

B vitamins such as B1, B2, B3, B5, B6, and B12, which are all good for fertility and mental, heart, and muscle health; vitamin D that seems to be more effective in increasing blood levels than vitamin D found in dairy; and iron, which is essential for pregnant women and people who may lack blood, are also more abundant in free-range cows. In fact, according to research, beef accounts for 14 to 21 percent of vitamin B12 intake of children and teenagers all over the U.S.

Red blood cell production is optimized when you ingest beef. This is important for hemoglobin synthesis.

Conjugated linoleic acid, which contains antioxidants and can prevent heart disease, diabetes, and cancer, can be obtained when you ingest beef.

Add seasonings to your beef dish for different kinds of tang. Although beef provides many nutrients, the Harvard School of Public Health still recommends its moderate consumption. Here are some of the best ways to serve beef.

Beef is a primary source of high-quality protein.

Beef is good for muscle-building and body growth.

Beef is good for fertility and mental and heart health.