Wormwood (Artemisia absinthium), also known as common wormwood, is an herb that is native to the temperate regions of North Africa and Eurasia, and is widely naturalized in the northern United States and Canada. This aromatic plant has been utilized as an herbal remedy since ancient times, though it is most famous for being a core ingredient in the alcoholic drink absinthe. Beyond this, wormwood has multiple medicinal applications even to this day. 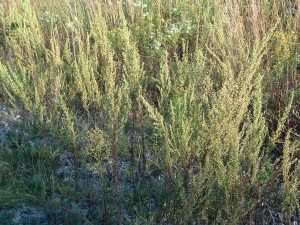 Wormwood is known to be composed of the following nutritional and medicinal constituents:

Because of these unique, organic components, wormwood has been said to possess astringent, depurative, anti-parasite, and nervine properties.

Throughout the centuries, wormwood has been thought of as an effective remedy for many a health condition. Among the problems this plant is believed to prevent or alleviate are:

The name of this plant is indicative of one of its most common uses. Wormwood is a potent deworming agent that can expel tapeworms, threadworms, and roundworms from the body when ingested. Moreover, wormwood is said to produce an environment that makes it difficult for parasites to thrive in the intestines.

Wormwood’s bitter components and acids allow it to act as an effective treatment for indigestion. The bitter flavor stimulates bile production, which in turn decreases the risk of indigestion. Combining wormwood with ginger, peppermint, or other digestive herbs increases the plant’s efficacy.

As an herbal emmenagogue, wormwood can aid those who suffer from infrequent menstruation. Because of this, however, wormwood should be avoided by pregnant women lest they heighten their chances of experiencing miscarriage.

The anti-inflammatory effects of wormwood can help ease the pains of arthritis, particularly pain of the joints.

Wormwood is believed to be a good appetite stimulant, especially after illness.

The digestive system can benefit from wormwood thanks to wormwood’s effects on intestinal worms and parasites.

Ways to use wormwood

Wormwood can be purchased as a liquid extract, tablet, capsule, essential oil, and tincture.

Outside of these, wormwood is available as an extremely bitter tea, though homemade wormwood tea is entirely possible. Laura Crawley of Leaf.tv recommends combining a teaspoon or half a teaspoon of dried wormwood with a cup of boiling water then allowing it to steep for several minutes. Afterwards, add the mixture to another herbal tea, like peppermint tea, to reduce the bitterness. Three cups of wormwood tea a day will suffice.

Note: wormwood should be taken for no more than four weeks at a time. As a stimulant, excessive wormwood consumption can have detrimental health effects like diarrhea, vomiting, and nausea.

Wormwood is an ancient herb that is believed to have numerous health benefits. In addition to supporting the digestive system, liver, and gallbladder, wormwood can provide relief from indigestion, arthritis, irregular menstruation, poor appetite, and irritable bowel syndrome. Excessive wormwood consumption can cause diarrhea and vomiting, however, and can be dangerous to pregnant women.