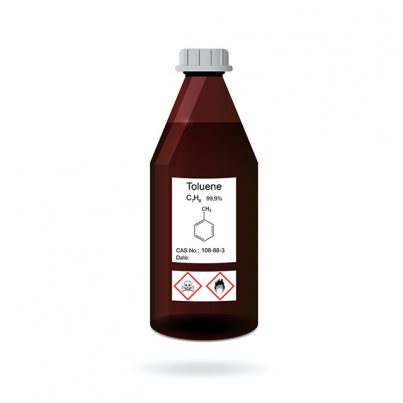 Toluene, also known as toluol, a colorless, water-insoluble liquid distinguished by its strong odor, which can range from pungent to sweet. The discovery of toluene is attributed to the Polish chemist Filip Walter, who first isolated this compound in 1837 by distilling pine oil. Toluene naturally occurs in crude oil at low levels and, as such, toluene is typically generated during the process of making fuels from crude oil. 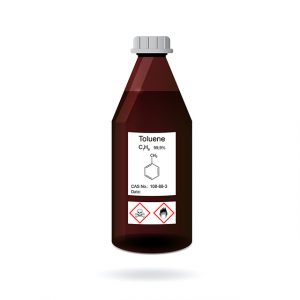 Toluene is a highly toxic chemical that can bring about a wide range of detrimental health effects when inhaled, swallowed, or when it comes into contact with the skin and eyes. According to the Occupational Safety and Health Administration (OSHA), the symptoms of acute toluene exposure can include:

Chronic exposure to toluene, particularly to high levels of this substance, can cause an individual to experience more severe side effects, such as:

Pregnant women should avoid toluene as much as possible: breathing in high levels of this substance can cause children to develop mental disabilities, minor craniofacial and limb anomalies, and central nervous system dysfunctions while still in the womb. Moreover, the United States Environmental Protection Agency (EPA) has noted that children who were born to habitual toluene abusers had signs of temporary renal tubular acidosis, a condition wherein acid accumulates in the body due to the kidney’s inability to properly acidify urine.

In addition to its potential reproductive toxicity, toluene can harm breastfeeding children. Toluene has been said to increase the risk of spontaneous abortions as well, though it’s been said that many other chemicals may have a hand in this.

Toluene is an acute and long-term environmental hazard that can remain in soil and bodies of water for several days. This substance can linger in aquatic organisms and leave behind long-lasting effects, such as impaired growth.

If inhaled, the central nervous system is the body system most at risk from toluene toxicity. Acute and chronic exposure to this substance have yielded a range of side effects observed in both humans and animals.

If swallowed, toluene can greatly impair the function of the kidney and liver. In one case, a person who had ingested toluene died following “a severe depression of the [central nervous system],” and showed signs of tubular kidney necrosis and swollen liver. Furthermore, vomiting toluene can place the lungs at risk as doing so can bring about aspiration into the lungs.

Regardless of the point of entry, toluene can cause irreparable damage to all of these organs with repeated and/or prolonged exposure.

Items that can contain toluene

Toluene is often utilized in the creation of such chemicals as benzene and benzoic acid. Moreover, this chemical tends to be present in a wide variety of products like:

How to avoid toluene

Toluene exposure most often occurs by inhaling the products that contain this chemical (e.g. paints, lacquers, gasoline, etc.). As such, it’s best to use such products in well-ventilated areas where toluene vapor inhalation can be minimized, and to use the smallest amounts of these products as possible. Tightly covering them when not in use is equally important.

Wearing goggles and neoprene or nitrile gloves can lessen the chances of toluene coming into contact with the skin and eyes.

If possible, opt for less toxic formulations and brands to limit toluene exposure. The OSHA has suggested substituting water-based paints, adhesives, and cleaners in lieu of those made with toluene.

Toluene is a chemical that can cause harm to the lungs, kidneys, liver, and central nervous system, depending on the point of entry. Serious damage to these body organs and systems can occur with prolonged and/or repeated exposure.

The symptoms of toluene exposure can range from headaches to dizziness to numbness to dermatitis.

Pregnant and breastfeeding women should avoid toluene entirely due to the risks it brings to children. Among unborn children, toluene can cause limb anomalies, mental disabilities, and problems with the central nervous system. Spontaneous abortions may happen as well.