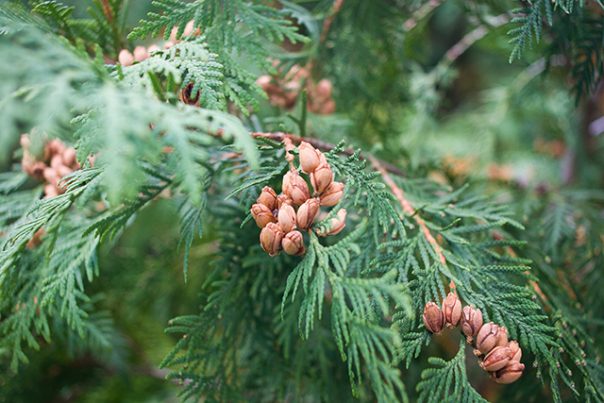 There are two varieties of thuja that are endemic to North America: thuja occidentalis or eastern arbovitae/northern whitecedar and thuja plicata or western redcedar. Thuja belongs to the Cupressaceae or cypress family of evergreen coniferous trees.

The thuja tree can reach a height of up to 66 feet (20 meters). It has a conical crown with a rounded top, and narrow, straight branches. Its parts that are usually used for medicinal purposes include leaves, bark, up to one-year-old branches, and twigs.

Thuja’s essential oil, which is extracted from the leaves, bark, and branches, is bright-yellow or colorless and has a camphor-like scent. It has high levels of thujone, which is very toxic. 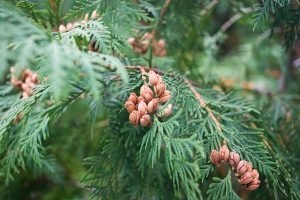 Thuja has anti-inflammatory properties. It can be used to treat osteoarthritis and a chronic condition called trigeminal neuralgia, which carries sensation from your face to your brain.

Thuja oil extracts can be used to treat skin conditions such as warts, genital warts (which are caused by the human papillo virus), plantar warts (which grow at the soles of the feet).

Thuja can be used to ward off the attack of insects.

Thuja can be used to treat a rare disease called leukopenia, which is a decrease of disease-fighting white blood cells (leukocytes) in your body. Research showed that taking echinacea, vitamin C and extracts of thuja, and whild indigo (Esberitox N) orally boosts the production of white blood cells after a person with leukopenia has received chemotherapy for six months or less. The treatment is not effective for people who have been taking chemotherapy for a longer time-frame, however.

Thuja is good for the immune system. It can help alleviate the symptoms of pneumonia.

Thuja is good for the lymphatic system. It is important for the organs in this system’s proper drainage.

Thuja is good for the female reproductive system. It can regulate abnormal menstruation cycles. It also alleviates the pain that women feel during this period. There are also indications that it can be used to treat ovarian cysts.

Ways to use thuja

Thuja should not be used by pregnant women, those who are in suspicion that they might be pregnant, and those who are lactating, for it has abortifacent properties. Also, avoid overdosing on thuja; excessive amounts of it could be extremely hazardous to your health. Skin or eye contact with undiluted thuja leaf oils can cause burns, so caution must be taken when handling them.

People who work with the wood of the thuja tree have been known to incur asthma and rashes. Symptoms of thuja poisoning include diarrhea, gastroenteritis, stomach ache, convulsions, and a drop in blood pressure, among others. Fatalities due to thuja poisoning have already been reported.

People who are taking medicine for epileptic seizures should also take care to avoid this plant.

Thuja can be used to ward off the attack of insects.

Thuja is good for the immune, lymphatic, and female reproductive systems.