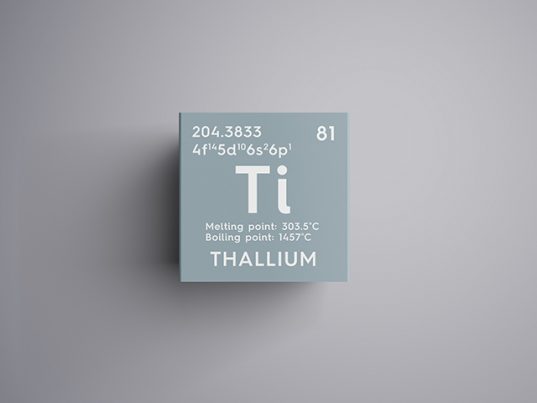 Classified as an “other metal,” thallium was discovered by Sir William Crookes in London in 1861. In March 1891, Crookes announced his discovery in Chemical News, a journal that he published and edited. However, Crookes had some difficulties while studying the chemical element because he only obtained a small amount of thallium. The chemist and physicist still managed to create thallium salts, and he also allegedly created some grains of powdered metallic thallium to display at the London International Exhibition in 1862.

Claude-Auguste Lamy was also present at the exhibition, and he independently discovered and isolated thallium in France in 1862. Lamy obtained more thallium than Crookes, and the former presented an ingot of the pure metal at the exhibition.

Crookes named thallium after “thallos,” a Greek word that means a green shoot or twig, which refers to the unique green spectral line that identifies the element. Thallium is very malleable, and the lustrous low-melting, silvery metal tarnishes in air and becomes a bluish-gray oxide. This chemical element has an atomic weight of 204.383, a melting point of 304, and a boiling point of 1473 degree Celsius. 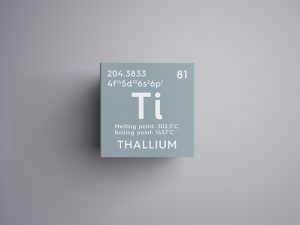 A high level of exposure to thallium can result in harmful side-effects. A study on workers that were exposed to the chemical element through inhalation in a span of several years reported side-effects to their nervous system that included numbness of fingers and toes.

The health effects of skin contact with thallium in people or animals also remain unknown.

Items that can contain thallium

Thallium sulfide is used in photocells because its electrical conductivity increases when exposed to infrared light. Thallium oxide is used to make glass with a high index of refraction. Thallium is also used as a material for creating gamma radiation detection equipment.

How to avoid thallium

When exposed to thallium, the chemical element can be absorbed into the body by inhalation, ingestion, and skin contact. Ingestion is an important route of exposure. One can avoid contact with thallium by using a National Institute for Occupational Safety and Health (NIOSH)-certified Chemical, Biological, Radiological, Nuclear (CBRN) Self Contained Breathing Apparatus (SCBA) with a Level A protective suit. Wearing coveralls or other work clothes, boots, and chemical-resistant gloves can also protect you in case you come into contact with a smaller dose of thallium.

Thallium is classified as an “other metal” and is very soft and malleable.

Exposure to a high level of thallium can cause negative side effects such as vomiting and diarrhea.

One can limit exposure to high levels of thallium by wearing a Level A protective suit or appropriate work clothes for low levels.