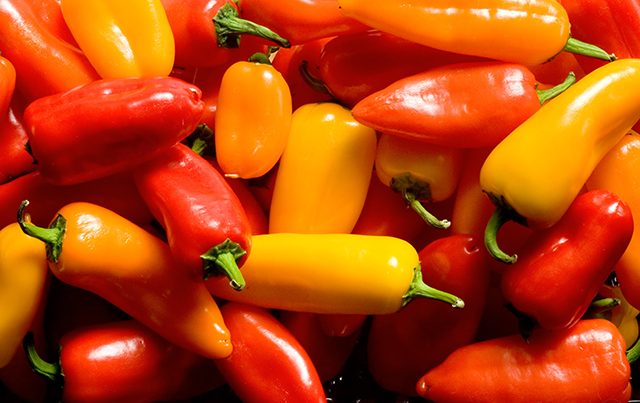 In America, the term sweet pepper is inclusive of a wide range of mild peppers that like chili, belong to the capsicum family. They are basically less pungent and are milder in flavoring than your basic chili pepper. The most famous kinds of sweet peppers are bell peppers, which are named as such because of their bell-like shape. Bell peppers that have yet to mature are usually a rich bright green in color; however, they also come in yellow, red, brown, orange, green, and purple.

Another sweet pepper of some renown is the red heart-shaped pimiento, which is the red stuffing that is usually found in green olives. Other kinds of sweet pepper include European sweet; the yellow and banana-shaped sweet banana pepper; the bullhorn, which is curved and usually green in color, cachucha; and the Cubanelle, which is tapered and has colors which range from yellow to red.

Sweet peppers, which have the scientific name of Capsicum annuum, are also included in the nightshade family of plants (Solanaceae), along with eggplants, cayenne peppers, chili peppers, potatoes, and tomatoes. They originated in central and south America more than 900 years ago and were dubbed “pepper” by the European colonizers of North America.

Sweet peppers can easily be bought all-year round, as they pick no particular season in which to grow. They also grow in any kind of weather. 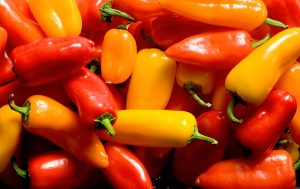 Sweet peppers have cancer-fighting capabilities. Their lycopene content is responsible for protecting against cancers of the cervix, bladder, pancreas, and prostate, while its beta-cryptoxanthin protect against the dangers of incurring lung cancer.

Their vitamin E content contributes to keeping skin healthy and glowing, and hair long and shiny. Sweet pepper are also good for the eyesight. Their lutein content lessens the risk of incurring cataracts and macular degeneration in old age. Sweet peppers also contribute to a spectacularly clear vision, which can be helpful at night when the eyes need to adjust to small amounts of light.

Sweet peppers are good for the cardiovascular system. Their pyridoxine and folate content help bring down homocystein levels in the body, thus lowering the chances of incurring a heart ailment. Homocysteine is an amino acid and breakdown product of protein metabolism, that in high amounts, has been known to cause heart attacks and strokes.

Sweet peppers are good for the female reproductive system. Their pyridoxine and magnesium content can stave off symptoms of pre-menstrual syndrome.

Ways to use sweet pepper

Sweet peppers can bring zest to your cold days and nights. They can be really crunchy, depending on how you cook them, and you can eat them out of the bag. For tips on how to prepare sweet peppers into tasty and delightful treats, visit this site.

Sweet peppers are good for the cardiovascular, respiratory, and the female reproductive systems.