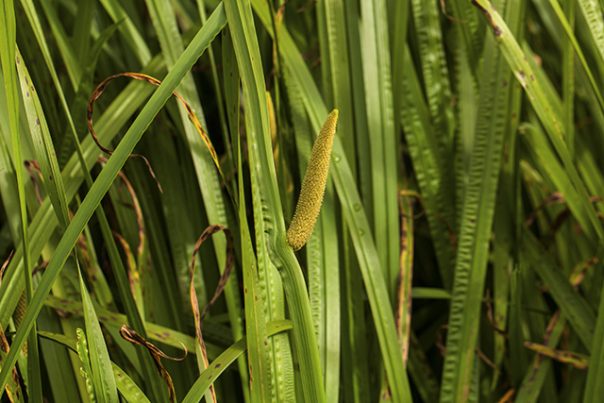 Strong and fragrant, sweet flag is a creeping rhizome used in treating ulcers and other gastrointestinal problems. It is also known as calamus and was brought to Europe by the Tartars in the thirteenth century. Due to the herb’s fragrance, ancient people used to burn sweet flag as an offering during prayers, the scent supposedly appeasing the gods and lifting up intentions to the heavens faster. Even the Bible makes mention of the herb, with several references of sweet flag found in the books of Exodus, Jeremiah, and Ezekiel.

You can easily identify the herb by its blade-like leaves and conical-shaped flower. 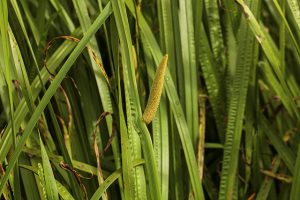 Calamus is mostly used to relieve any digestive issue, from hyperacidity to heartburn to dyspepsia. The nutrients found in the rhizome interact with your gut and soothe the lining, immediately offering quick relief for patients suffering from acute gastrointestinal conditions.

Nonetheless, calamus should not be taken regularly or excessively. Aserone, one of sweet flag’s components, can be highly toxic when taken in higher doses. It can also become a hallucinogen. As such, the consumption of this herb should be done under strict medical supervision.

If you are sourcing the herb through your local traditional drug store, make sure to discuss with the pharmacist any potential side-effects sweet flag may have. Pregnant women, along with those under certain medications like antidepressants of statins, should avoid taking calamus.

Sweet flag is also used as a treatment for various other health conditions, including:

Calamus is believed to be an effective herb to combat a smoking addiction. Traditional healers typically ask their patients to chew on the calamus root, which supposedly curbs cravings for nicotine.

Due to sweet flag’s potency as a digestive aid, it can also be used to blunt forms of gastric upset during the acute stages of drug withdrawal. Again, overusing this herb is highly discouraged. The United States Food and Drug Administration has stated that taking too much calamus can prompt seizures.

Small doses of the herb, however, can be taken to improve sexual desire. The stimulant properties of the herb are said to increase amorous intentions among men and women.

Sweet flag is best used to support the digestive system. There is also evidence to suggest that the herb can be used to maintain healthy respiratory function. When applied topically, sweet flag can provide relief for certain skin problems.

Ways to use sweet flag

Calamus is traditionally taken as a tea. Casual users of the herb should be very careful with how much of the rhizome they plan to boil. It is best to ask your local pharmacist for the correct amount to use in the tea. The same holds true if you plan to just chew the root fresh. Despite the name, sweet flag has a bitter, almost spicy taste. Those who are not used to it will immediately want to regurgitate it but must hold back the reflex. Adding honey or various sweeteners may or may not help; most people just recommend taking it as it is and enduring the unusual taste.

Sweet flag can also be extracted into an oil. This can be applied topically, but should never be ingested.

When ground into a spice, the taste is somewhat abated and can be used in the same way as a vanilla bean or cinnamon quill to inject some sort of flavor and smell into various dishes.

Calamus is the key ingredient in absinthe and was supposedly one of the main ingredients for the original recipe for Dr. Pepper.

Sweet flag is an ideal remedy for acute gastrointestinal conditions.

Consuming too much of the herb can cause various negative side-effects.

Its consumption should be done under strict supervision.