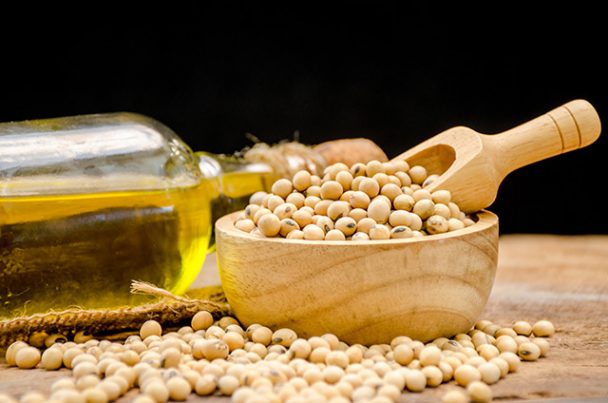 Soybean oil is a type of oil that is extracted from soybeans. The procedure of extracting the oil from soybeans usually involves using yellow soybeans. After the beans have been cracked, the meat of the soybean undergoes a process that sets the moisture content of the soybean oil. Then, the mixture is rolled into flakes and pressed so that the oil will come out. After that, the extracted oil is refined and cleansed to produce a final product that is similar to other types of vegetable oil. Sometimes, soybean oil is combined together with other oils to make a hybrid vegetable product that makes it one of the less costly cooking oils on the market.

Soybean oil is used in food production both at home and commercially. For cooking at home, soybean oil works well for frying foods such as chicken and battered vegetables. The oil makes the food being fried to have a golden brown color. In addition, it does not inhibit the flavors from any spices that were added to the batter. Soybean oil is also used as a replacement for other vegetable oils in baking. Since this oil does not affect the flavor of the other ingredients in the recipe, there is no aftertaste from soybean oil. Moreover, it can help maintain a higher degree of moisture in cakes and pastries, making them more delectable. Soybean oil, together with apple cider vinegar, salt, pepper, and other spices, is also used to make salad dressings. As a cooking oil in general, it is used for frying, seasoning, and baking. Most supermarkets today sell pure soybean oil. This type of oil is often more expensive than other blends of vegetables and is almost the same price of peanut and olive oils. 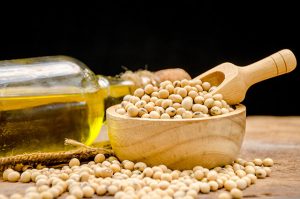 Harmful effects that can be caused by soybean oil

Soybean oil may be used for cooking, yet there are dangers of cooking with this type of oil. According to an entry by EzineArticles.com, soybean oil contains a toxic substance known as phyto-hema-glutinin or PHG. PHG is a large protein molecule that has the ability to agglutinate human blood, which results to the slowing of blood circulation and the forming of blood clots. It also mixes with impurities in the blood and forms plaque on the walls of the arteries. In addition, PHG adversely affects the central and peripheral nervous system, changes activity of hormones, slows down vital organ function, disrupts digestion, and causes memory loss. Soybean oil has also been found to negatively affect the thyroid, resulting to a slower metabolism and possibly, making us gain weight faster in the long run. Soybean oil can also cause inflammation as it significantly contributes to the excessive amounts of omega-6 in the diet.

There are a few body systems harmed by soybean oil. Soybean oil is harmful for the digestive and endocrine system because it has been found to cause obesity and diabetes based on animal studies. This oil is bad for the cardiovascular system as it can affect blood pressure and cholesterol levels and cause inflammation. Soybean oil may also cause cancer because it is packed with polyunsaturated fats that can easily oxidize. Oxidation, in turn, produces harmful compounds that are dangerous for the body.

Soybean oil is a type of cooking oil extracted from soybeans. It is used for frying, baking, and seasoning.

Soybean oil is harmful for the digestive, endocrine, and cardiovascular systems.

Soybean oil may cause cancer.