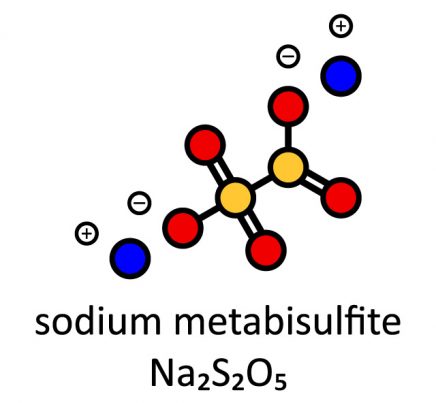 Sodium metabisulfite is a white crystalline powder that exudes a slight sulfuric odor. A Pub Chem article notes that the compound is classified as a noncombustible chemical, but may emit hazardous sulfur and sodium fumes when heated at high temperatures. The entry has also revealed that the compound turns into a corrosive acid when mixed with water.

An article published on Your Health Remedy website states that the compound is commonly used in sanitizing various equipment during beer and wine production. Likewise, the chemical is traditionally used as a purifying agent for potable water reverse osmosis membranes in various desalination systems. The hazardous chemical is also used as a corrosion-inhibiting agent in the gas and oil industry. In addition, the pharmaceutical industry uses the chemical as a tablet excipient and as an antioxidant additive in injectable medicines.

The acidic compound is used in photography and as a bleaching agent in various commercial items such as cotton, paper pulp, and wool. Likewise, the harmful chemical can be traced in a plethora of personal care products including hair bleaches, shampoos, tints, and colors as well as hair dyes, muscle soreness products, anti-aging products, and some skin and bath products.

Moreover, the food industry uses sodium metabisulfite as a potent antimicrobial agent against bacteria and fungi. The chemical is commonly added to dried foods such as raisins, potato chips and frozen vegetables as well as apples, fruit juice concentrates, and pickles. 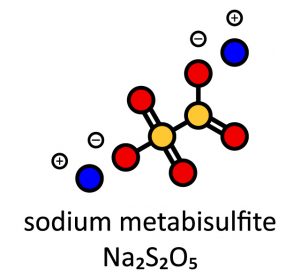 Harmful effects that can be caused by sodium metabisulfite

Sodium metabisulfite is notoriously detrimental to respiratory health. A Live Strong article stresses that inhaling the chemical may result in severe irritation of the respiratory tract. According to the entry, symptoms of chemical-related irritation include bronchial constriction, wheezing, and labored breathing. Likewise, exposure to the hazardous compound is known to trigger an allergic reaction similar to asthma.

Likewise, the compound negatively affects the digestive tract. The article stresses that ingesting the compound in its pure form irritates the digestive system as the chemical tends to release sulfurous acid in response to stomach acids. The hazardous chemical is found to trigger the onset of different digestive ailments including  nausea, vomiting, diarrhea, and abdominal pains. The toxic food additive is also known to disrupt blood circulation and wreak havoc on the central nervous system. The entry warns that ingesting up to 10 grams of sodium metabisulfite may lead to these adverse health emergencies.

The article has also stressed that exposure to the harmful chemical may cause irreversible damage to the eyes. According to the entry, direct contact with the chemical may cause severe eye irritation characterized by pain, stinging, and tearing as well as redness and swelling. Sodium metabisulfite exposure may also trigger the onset of more serious eye conditions such as corneal damage and blindness. Likewise, skin exposure may result in redness, itching, and pain.

Sodium metabisulfite is known to be particularly detrimental to both the respiratory and the digestive tracts. Likewise, the harmful compound is shown to impact blood circulation and the central nervous system. The hazardous chemical is also found to be highly toxic to both the skin and the eyes.

Sodium metabisulfite is particularly detrimental to both the respiratory and the digestive tracts.

Sodium metabisulfite negatively affects both the circulatory and the central nervous systems.

Sodium metabisulfite is hazardous to both skin and eye health.