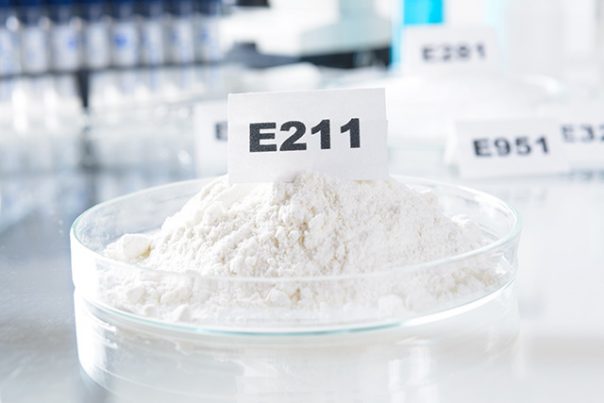 Sodium benzoate, with an E number of E211, is the sodium salt of benzoic acid. Introduced in 1999, it is a colorless crystalline powder that is commonly used as a food preservative because it helps in inhibiting the growth of fungus and bacteria in acidic products. Moreover, it is also used as as an antiseptic, in prescription medications, in tobacco, in pharmaceutical preparations, in dyes, and as a rust and mildew inhibitor. It has a molecular formula of C7H5NaO2. 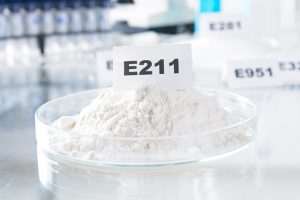 Harmful effects that can be caused by sodium benzoate

Sodium benzoate is generally recognized as safe (GRAS) as a food additive. However, the Food and Drug Administration (FDA) has placed a limitation on the concentration of the substance in food products to 0.1 percent by weight, as there are several potential hazardous effects of sodium benzoate. One of which is it may trigger symptoms or episodes of attention-deficit/hyperactivity disorder or ADHD. This disorder may be commonly seen in children, but it can also be present in adults. Symptoms of ADHD include inattention, hyperactivity, and impulsivity. However, it is difficult to determine the exact relationship between sodium benzoate and ADHD because other food additives in the same foods as sodium benzoate may have the same effects.

Moreover, it can trigger asthma attacks. Foods high in saturated fat, dairy products and foods with food additives, such as sodium benzoate may initiate asthma attacks, which causes narrowing and swelling of your airways that makes breathing difficult.

Lastly, sodium benzoate may cause high blood pressure or hypertension, which in turn may increase the risk of heart disease, kidney disease, and stroke.

Even though there are a lot of chemical preservatives that cause harm in the body, synthetic sodium benzoate is especially dangerous because it destroys parts of the DNA. Sodium benzoate together with ascorbic acid or vitamin C and potassium benzoate may form a known carcinogen and DNA damager called benzene. Thus, consuming foods and drinks that contain sodium benzoate may promote different types of cancer.

A study in 2007 on living yeast cells concluded that the sodium benzoate in the soft drinks tested actually caused damage to the mitochondria, which plays an important role in generating metabolic energy in a eukaryotic cell. Sodium benzoate can cause serious harm to the DNA in the mitochondria to the point that it is possible to completely destroy it.

In addition, the combination of both sodium phenylacetate and sodium benzoate may cause symptoms such as chest pains, severe headache, fainting, slow heartbeat, blurred vision, unresponsiveness, and slurred speech.

Sodium benzoate may also be harmful if consumed during pregnancy. Several animal studies concluded that this chemical additive may have dangerous effects on the fetus. Although there are no studies in humans, it is advised to refrain from eating and drinking products that contain this chemical preservative during pregnancy.

Lastly, this compound can cause mild allergy symptoms to some people. Symptoms such as itching, rash, or congestion, usually appear within minutes to a few hours after ingesting foods that contain this substance.

Sodium benzoate, with an E number of E211, is the sodium salt of benzoic acid. This compound is commonly used as a food preservative as it helps stop the growth of fungus and bacteria in acidic products. Although generally considered as safe, the FDA has placed a limitation on the concentration of the substance in food products to 0.1 percent by weight. Sodium benzoate may trigger symptoms of ADHD, asthma attacks, and increase the risk of heart disease, kidney disease, and stroke. It may also cause cancer, allergies, and is harmful during pregnancy.