Scoliosis – causes, side effects and treatments at NaturalPedia.com

Scoliosis is a condition that involves an abnormal sideways curve of the backbone or spine. Scoliosis typically develops in the thoracic spine or the thoracolumbar area of the spine. The curves may develop as a single curve or C-shaped, or as two curves or S-shaped. It can occur due to congenital, developmental, or degenerative problems. Most cases of scoliosis actually do not have a known cause – these are called idiopathic scoliosis. Scoliosis occurs most commonly in late childhood and early adolescence, when children grow fast. Girls are more likely to have it than boys and it can run in families. In some cases, scoliosis may be present at birth or it may be caused by muscle spasms, inflammation, tumors, or some other disorders. It may also occur at some point in time after radiation therapy to the backbone. 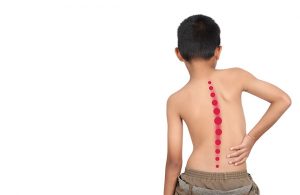 The known signs of scoliosis can include a slightly off-centered head, non-symmetrical rib cage in which the ribs may be at different heights, one hip is more prominent than the other, clothes do not hang properly, one shoulder or shoulder blade is higher than the other, leaning to one side, and uneven leg lengths. In infants, scoliosis symptoms can include a bulge on one side of the chest and consistently lying curved to one side. In more severe cases, problems with the heart and lungs may also occur, which result in shortness of breath and chest pain. Some types of scoliosis can cause back pain although it is not typically very painful. Nonetheless, back pain is not uncommon in older adults with long-standing scoliosis. If left untreated, problems can arise later in life, such as impaired heart and lung function. Other possible complications of scoliosis can include lower self-esteem, persistent pain if there is wear-and-tear of the spine bones, spinal infection after surgery, spine or nerve damage from an uncorrected curve or spinal surgery, and leakage of spinal fluid.

The body system harmed by scoliosis is the skeletal system.

List of foods or nutrients that may prevent scoliosis

The foods and nutrients that can help prevent scoliosis include foods rich in calcium, such as yogurt, skim cheeses, broccoli, and orange, and foods rich in vitamin D, such as milk, cereal, saltwater fish, and eggs. Other nutrients that help with scoliosis include collagenics and vitamin E, which can be found in foods like walnuts, hazelnuts, olive oil, mayonnaise, and sunflower seeds.

Treatments for scoliosis depend on the age of the patient, severity of the curve, and whether it is likely to get worse with time. A lot of people will not need any treatment and only a few will need to have surgery on the spine. For babies and toddlers, they may not need treatment as the curve might improve over time. Still, they may need to use a plaster cast or plastic brace on their back to stop the curve from getting worse as they grow. For older children, they may also wear a back brace to stop the curve getting worse until they stop growing. Sometimes surgery may be required to control the growth of the spine until an operation to straighten it can be performed when they stop growing. For adults, they may need pain relievers and in some cases, surgery. There are also some exercises that can help people with scoliosis.

Scoliosis is a condition that involves an abnormal sideways curve of the backbone or spine.

Scoliosis causes a slightly off-centered head, non-symmetrical rib cage in which the ribs may be at different heights, one hip is more prominent than the other, clothes do not hang properly, one shoulder or shoulder blade is higher than the other, leaning to one side, and uneven leg lengths.

Nutrients that can help with scoliosis include vitamin D, calcium, vitamin E, and collagenics.

Scoliosis treatments include back brace, surgery, and exercise.