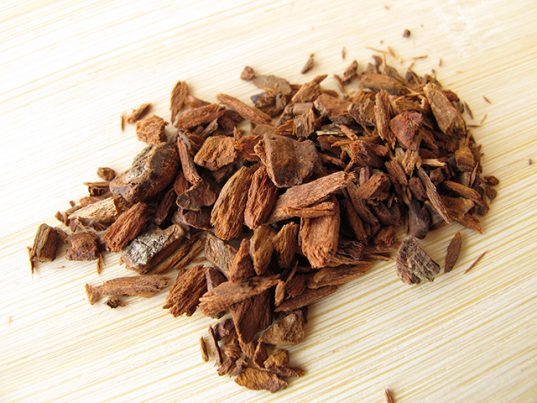 Quinine is an alkaloid that is derived from the bark of the cinchona tree, which is native to the Peruvian Andes. According to an item published on the Huffington Post website, quinine is originally used as a malaria treatment by South American Indians. The chemical is also traditionally used as a mild antipyretic and analgesic, and as a bitter flavoring agent in various medicinal preparations, according to a Pub Chem entry.

However, the alkaloid is rarely used as a medicinal treatment in modern times. The U.S. Food and Drug Administration has actually banned quinine from being used as a treatment for leg cramps due in part to its potential toxicity. 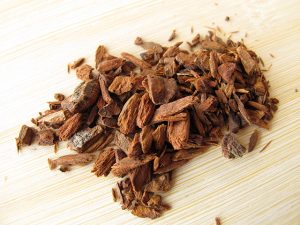 Quinine is associated with a plethora of adverse side effects. An article posted on the Everyday Health website reveals that the alkaloid may cause hypoglycemia or severely low blood sugar levels. Symptoms of hypoglycemia include increased heart rate, confusion and dizziness and blurry vision as well as seizures, unconsciousness and shakiness, sweating or chills. Other symptoms of quinine-induced hypoglycemia include tingling or numbness on the lips or tongue, irritability and anxiety as well as anger, stubbornness or sadness.

Likewise, the alkaloid is known to trigger the onset of adverse digestive conditions such as nausea, vomiting and stomach pain as well as diarrhea, dark or tarry stools, sore throat and bleeding gums. The alkaloid appears to compromise the body’s immunity as well. According to the article, quinine exposure often leads to weakness and fever. Quinine exposure is found to raise the odds of adverse blood conditions too. The entry notes that the alkaloid causes easy bruising, excessive and unusual bleeding and bloody urine.

The chemical is also detrimental to skin health. Quinine exposure may result in serious skin issues such as hives, rash, blisters and inflammation of various parts of the body including face, lips, eyes and hands as well as feet, ankles and lower legs. The alkaloid is also associated with hearing and vision problems.

Quinine is particularly detrimental to digestive health. Likewise, the alkaloid may compromise both heart and brain health, the immune system and overall blood circulation. The chemical may negatively impact the skin, eyes and ears as well.

Items that can contain quinine

Quinine is a key ingredient in tonic water and is commonly added to alcoholic beverages such as gin and cocktails. An article posted on the Live Strong website also notes that trace amounts of quinine can be found in gummy desserts and bitter lemon and lime drinks.

How to avoid quinine

It is recommended to use protective equipment and clothing articles to prevent quinine exposure. Due to its potential toxicity, it is also advisable to consult a physician before using quinine. It is also recommended to do away with products that contain the toxic chemical.

Experts caution that quinine should not be taken with other drugs such as statins, cancer medications and antibiotics. Likewise, health practitioners discourage taking quinine with antidepressants, antifungal drugs and antipsychotics as well as HIV medications, tuberculosis drugs and hepatitis treatments.

Quinine may cause hypoglycemia, increased heart rate, confusion and dizziness.

Quinine is particularly detrimental to the digestive tract, the heart and the brain.

Quinine may affect the skin, eyes and ears.