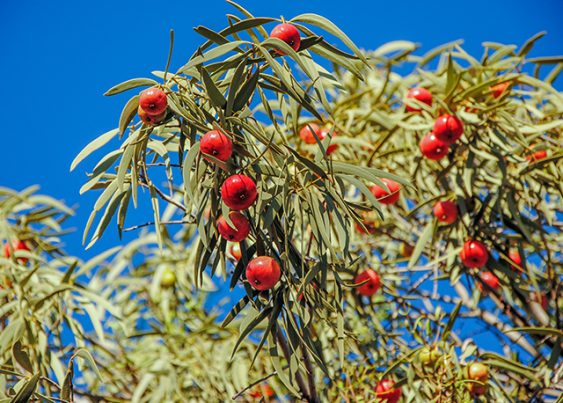 Studying nutrition is a fascinating though lengthy endeavor. As you browse through this food treasury, you would be hard-pressed to find a lesser-known fruit than the quandong. Many people remain unaware of this beautiful, tiny treasure found only in the deep bushes of Australia. Perhaps its invisibility is not so strange when you consider that the Aboriginal people fiercely guarded this bright red, inch-long fruit. It has only been recently that medical science has explored quandong’s therapeutic benefits.

The fruit has been studied since quite the ancient times. Botanical reviews have concluded that the quandong species has been thriving in Australia for at least 40 million years. The fruit is said to smell like dry lentils and has a mild sour and salty taste.

Technically speaking, quandong refers to three types of wild bush fruits. There is the desert quandong (santulum acuminatum) which is the “sweetest” variety, although the taste still is more savory than anything. This is the variety we will be referring to in this introduction. 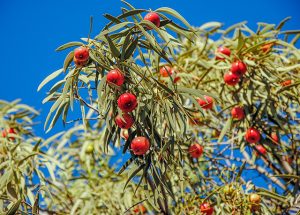 Quandongs are great purgatives. Traditional healers like to make a tea made from these fruits to help patients expel waste through urine or feces. The fruit is a gentle laxative, so people need not worry about cramping or diarrhea.

A quandong infusion is likewise prescribed to alleviate symptoms of rheumatism. Scientists are still determining how the fruit affects the central nervous system but note that the fruit does help lessen pain among rheumatic patients.

Healers would also masticate the fruit’s leaves and spit the saliva mush on their patient’s skin. The paste is said to help reduce skin infections and various conditions such as boils and sores. Quandong nuts were additionally crushed and made into an oil to nourish and condition hair.

The Australian people call the quandong0 “wild peach” or “desert peach”, stating that the fruit is as rich in vitamin C as the conventional peach. Scientists confirm this to be true. Quandong has a vitamin C content comparable to that of an orange.

Quandong supports the entire immune system. It can be taken to boost one’s nutritional profile. The fruit’s leaves and nuts, however, are notably effective in enhancing the skin and hair.

Ways to use quandong

The fruit is versatile in its culinary applications. Most people prefer to have the fruit as a tea or infusion. The more adventurous can try for a quandong spread (similar to hummus) to place on a cracker or bread.

Quandong is an exotic fruit found only in Australia. It appears to be a great antioxidant as well as an effective agent in promoting beautiful skin and hair.