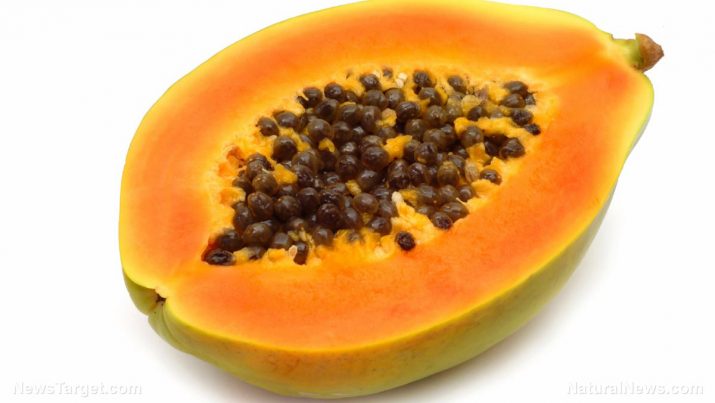 Papain is an enzyme that can be extracted from the milky portions of unripe papaya. It can be found in the leaves, latex, roots, and fruit of the papaya plant. It catalyzes the breakdown of proteins through the addition of a water molecule known as hydrolysis. This enzyme is used in biochemical research which involves the analysis of proteins, in meat tenderizing, beer clarifying, hair removal from hides before getting tanned, and in enzyme-action cleansing agents for soft contact lenses. Furthermore, it is used in toothpastes and make up products. It is also used in different remedies for indigestion, ulcers, fever, and swelling.

Depending on the age and gender of the papaya tree, the quantity and activity of papain enzyme contained in the different parts of the plant vary. Female trees and older fruits contain greater amounts of crude papain than male trees and younger fruits. On the other hand, young papaya fruit from female trees produce more active papain than the papain from old fruit which were produced by male or hermaphrodite plants. 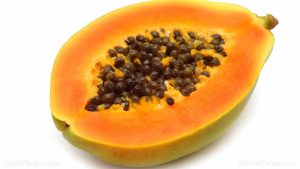 Harmful effects that can be caused by papain

Although the papaya fruit has many health benefits, there are also several potential side effects of papain, particularly in green unripe papaya fruit, papaya seeds, papaya lead, and papain enzyme digestive supplements.

The enzyme can harm pregnant women and their babies. Raw papaya has been used as a natural way of aborting unwanted babies. The raw fruit may trigger uterine contractions because of the presence of latex. As a result, it can cause abortion, miscarriage, premature labor, abnormalities in the baby, and even stillbirth. Papain works like oxytocin and prostaglandin. These two hormones triggers the contractions to stimulate labor pains. Haemorrhagic placentas may be experienced by pregnant women. In some parts of the world, lactating women are discouraged to include papaya in their diet because papain might have a negative effect on the infant.

Over-consumption of papaya may also lead to the condition called carotenemia, that may cause discoloration of the skin. It is a condition in which the white parts of the eyes, soles and palms turn yellow.

The enzyme can cause respiratory disorders. Papain is considered as a potential allergen, so increased consumption of the papaya can result to various respiratory ailments such as uneasy breathing, asthma, congestion in the nasal passages, wheezing, and hay fever.

High consumption of papaya may also result to an upset stomach, which can cause symptoms such as stomach ache, abdominal cramps, bloating, flatulence, and nausea. This is because of the many fibers along with the latex from the papaya. In addition, it is not also safe for people with diarrhea because it may cause dehydration.

Papaya is not recommended for those who are on blood thinning medications or anticoagulants like aspirin, because of papain’s blood thinning ability. People who will undergo surgery in a few weeks and those with blood clotting conditions should also refrain from eating papaya.

People with cardiovascular disorders should not eat papaya because papain is known to slow down the rate of heartbeat in a negative way, which triggers cardiovascular conditions.

There are a few body organs that can be harmed by papain. Papain may harm the throat. It can cause sore throat. It may also cause other allergic reactions, such as hives, inflammatory conditions, rashes, chest pain, and breathing obstructions. Papain may harm people who have diabetes and hypoglycemia because the enzyme can even lower the blood sugar levels.

Papain, an enzyme, can be obtained from the milky portions of an unripe papaya fruit. It can also be extracted from the leaves, latex, roots, and fruit of the papaya plant. The enzyme can cause abortion, allergic reactions, constipation, and upset stomach. It may also harm people with diabetes, hypoglycemia, those who are allergic to latex, and those who are taking blood thinners or have a blood clotting disorder.