Mochi is a type of traditional Japanese sweet rice cake with historical roots in Western Japan. As a culture dependent on rice, the Japanese have attached religious significance to the grain in addition to its agricultural importance. Mochi is believed to represent the spirit or the soul of rice, and as such, mochi is also said to revive and re-energize those who eat it. Special occasions like New Year’s or Children’s Day in Japan are marked by the soft, chewy treat. Nowadays, mochi has become more popular worldwide alongside other Japanese foods like ramen. 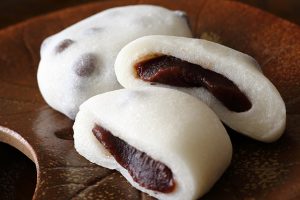 The main benefit of mochi lies in its core ingredient: rice. Sticky rice flour, also known as glutinous rice, contains a number of beneficial nutrients such as:

As a food said to bring health, good luck, and fortune, mochi is considered to be a food good for:

Mochi is regarded as an excellent treat for pregnant women or lactating mothers because it promotes the production of breast milk. One particular type of mochi, kusa mochi, is often given to women after childbirth. This mochi variety is made with mugwort, an herb that grows wild all over Japan and is high in calcium and iron. Both of these nutrients are beneficial to a mother and her child. People who suffer from anemia or who want to gain weight are recommended kusa mochi as well.

Because mochi is easy to digest and said to increase the stamina of people who consume it, it’s a food favored by individuals who undergo physically strenuous activities, like Japanese farmers and laborers. Depending on the portion size, mochi can also be calorie-dense and filling.

The thick, gooey consistency of mochi can make the food dangerous to those who can’t swallow properly. There have even been a number of fatalities brought about by mochi consumption during New Year’s in Japan. Most of these cases involved the elderly, so be cautious with mochi when giving some to the elderly.

According to Japanese tradition and folklore, mochi can strengthen:

Ways to use mochi

The most common and popular type of mochi is the rice cake form that comes in a variety of flavors and additional fillings. These fillings range from peanuts to anko (sweet red bean paste) to chocolate to strawberry. There are even mochi that come with ice cream. Occasions like New Year’s call for special mochi, such as the kagame mochi, which are two giant mochi balls eaten during the mochi breaking ceremony.

Those who don’t have access to mochi can opt to make some in their own home. Traditionally, mochi is made in the mochitsuki ceremony and requires two people: one person to pound the steamed rice into dough using an usu (mortar) and kine (mallet), and another person to turn the dough over every time it’s pounded. These days, it’s much easier to use an electronic mochi maker, rice cooker, or even a microwave to prepare homemade mochi. The Internet has made it even easier to find mochi recipes, so anyone can make mochi as they please.

Mochi is highly recommended for pregnant women due to its abilities to promote breast milk production.

Mochi is easy to digest and can increase stamina.

Those who have a hard time swallowing should avoid taking mochi.