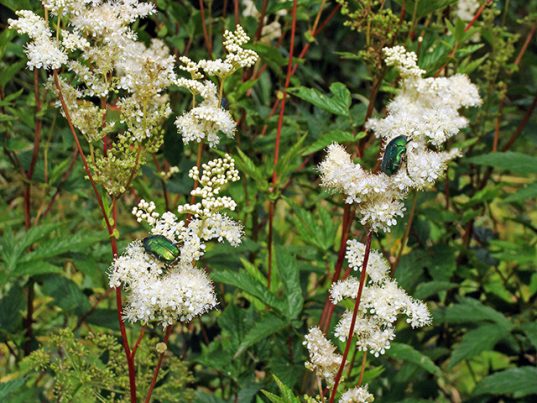 Meadowsweet, which has the scientific name Filipendula ulmaria, of the family Rosaceae, is endemic to Europe and North and Central Asia. It is also called meadow queen, meadow-wort, lady of the meadow, meadsweet, bridewort, dollof, pride of the meadow, queen of the meadow, and Quaker Lady.

True to poet Dora Hill Read Goodale’s verses, “Fleecy white plumes of meadowsweet, the spires of closely clustered bloom, are not found near dusty waysides scorched with barren heat,” meadowsweet thrives in moist soil. Its best blooming seasons are between June and September.

Meadowsweet has been known as a fragrant herb since the time of physician Pedanius Dioscorides. Also, in describing meadowsweet’s almond scent, herbologist and botanist John Gerard wrote “for the smell thereof makes the heart merrie and joyful and delighteth the senses”.

Meadowsweet has always been included in the flowers that constituted the bridal bouquet, as it was thought to bring happiness and love into the marriage. It is also considered as one of the sacred herbs as dubbed by the Celtic Druids, along with vervain and watermint.

According to the American Gastoenterological Association, the side effects of NSAIDs – which include bleeding ulcers and tinnitus (ringing in the ears) – cause more than 100,000 people to be hospitalized and causes the death of more than 16,500 people in the United States alone, each year. 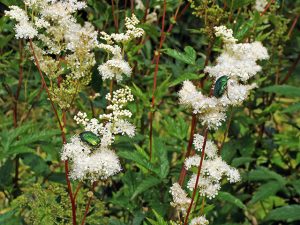 Meadowsweet has astringent, depurative (or detoxifying), febrifuge (or fever-alleviating), and tonic properties.

Meadowsweet has anti-inflammatory properties. It can be used to treat joint pain, essentially illnesses like arthritis, gout, or for rheumatic conditions. Also, since meadowsweet contains the compound salicylate, which can be converted to aspirin, meadowsweet can be used to alleviate other forms of body pain.

Meadowsweet has diuretic properties. Therefore it can contribute to the health of the urinary tract by inducing proper urination and thereby allowing for the normal removal of toxins from the body.

Meadowsweet is good for the digestive system. It is an aromatic herb that treats the intestinal tract’s mucous membranes and alleviates gastrointestinal issues such as congestion, diarrhea, gastritis, ulcer, and acid reflux. It also relieves the feeling of food staying too long in the stomach.

Meadowsweet is good for the immune system. It can be used to treat minor ailments such as the common cold, a slight fever, and infections of the throat and sinuses. It can be served as treatment to a person with a pounding headache. It can also address lupus, which is a chronic autoimmune disease that attacks healthy tissues, resulting in issues with the lungs, blood, heart, joints, kidneys, and skin.

According to herbologist Robert Dale Rogers, the Iroquois tribe used the mashed meadowsweet root with yarrow to allevaiate symptoms of nausea.

Meadowsweet is good for the female reproductive system. It is said to have antimicrobial properties that can help fight off symptoms of cervical dysplasia, which is a precancerous condition in which toxic cells grow on the surface lining of the cervix.

Ways to use meadowsweet

Meadowsweet can be taken as a tea, as an extract or tincture, or in capsule form. However, doctors warn against it being taken by anyone under 16 years old – especially those who have flu or chickenpox symptoms – because doing so puts them at risk of incurring Reye’s syndrome, a rare but chronic condition that is characterized by swelling in the liver and the brain.

The stuff should also not be taken by people who have internal bleeding issues, asthma, and an allergy to aspirin.

Meadowsweet is good for the immune, digestive, and female reproductive systems.