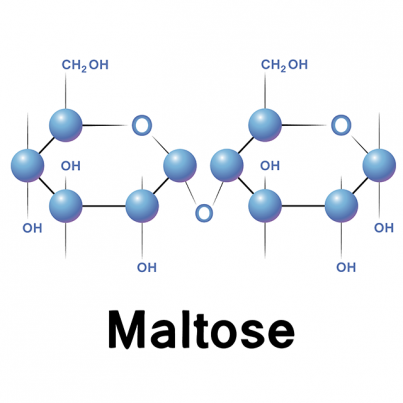 Maltose or malt sugar is considered a disaccharide that is composed of two glucose molecules joined together by an alpha (1,4) glycosidic bond. It is not an essential nutrient, which means it can be manufactured inside the body and there is no need for you to obtain it from food or supplements.

Maltose’s name is derived from “malt” which means “soft grain” and “-ose” which means sugar. It has four calories per gram, a 105 glycemic index for every 50 grams, 50 percent sweetness relative to sucrose, and a 100 percent net content in carbohydrates. It is an intermediate product of starch digestion.

When a third unit of glucose is added to maltose, another type of sugar is formed called maltotriose. Adding another step to ths process will produce maltodextrins.

Maltose can be replicated via unnatural means in a laboratory by heating the medium with the addition of a strong acid for around 10 minutes. Heating can speed up the process of preparing maltose for the creation of beverages; this is why large, commercial-scale producers choose this method of reproducing maltose to be able to create large batches of products.

Maltose is not something that can be consumed as a sweetener the way we do table sugar. It is, however, an excellent additive to packaged foods, including non-alcoholic beverages.

Free maltose can be found in pears, kamut, spelt, and sweet potatoes. Syrups that are rich in maltose include high maltose corn syrup (HMCS), barley malt syrup, brown rice syrup, and corn syrup, while beverages that have a maltose content include kombucha rice malt, beers, ciders, compotes, and malt beverages that are non-alcoholic.

Rounding up the list of foods that contain maltose are processed foods such as caramel sauce, chocolates, compotes, jelly candies, ready-to-eat cereals, and confections, especially those from China, Taiwan, and Hong Kong.

Maltose can also be produced from barley, corn, sago palm starch, or tapioca using the enzyme alpha-amylase of fungal origin. It is very hygroscopic: It attracts moisture at 60 percent relative humidity. It is a reducing sugar and at the same time a fermentable sugar; that is why it is involved in the Mailard browning reaction with amino acids, and it can be used to produce beer, respectively.

Adding maltose to foods can increase their shelf-life. It would not only keep the flavor of foods stable, but it will also maintain the foods’ original color.

Maltose digestion happens this way: the enzymes maltase and isomaltase break down maltose to two glucose molecules, which are then absorbed into the intestinal lining. Sometimes, however, maltose is directly absorbed by the body, without it needing to be transformed to glucose.

The ingestion of too much maltose and glucose can cause diarrhea, as they absorb water form the intestinal wall. The laxation threshold for maltose in healthy people is about 120 grams per day. Too much maltose can also result in tooth decay and high blood sugar levels.

There are people who need to limi their intake of maltose so as to protect their health, or to avoid aggravating the symptoms that they experience from their current ailments. These include people suffering from: 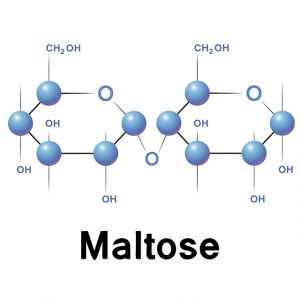 A study that was published in 2002 stated that maltose can increase saliva production, thus acting as a quick remedy for dry mouth. If you have dry mouth, you might want to suck on maltose lozenges in anhydrous crystalline form.

Medical literature is limited as to which body systems maltose is most helpful to. However, what we can say for certain is that it provides energy for the body, and so it is essential so that an individual can perform his day-to-day tasks.

Maltose is an intermediate product of starch digestion.

Maltose is not something that can be consumed as a sweetener the way we do table sugar.