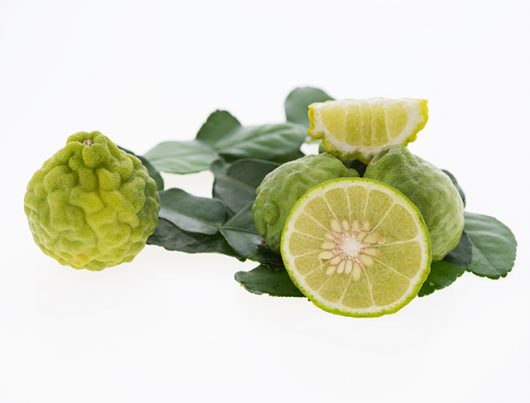 Kaffir limes (Citrus hystrix), also known as makrut limes, are green-colored, bumpy-skinned citrus fruits native to various tropical regions in Asia, most notably Thailand, Indonesia, and the Philippines. These aromatic fruits and their leaves have a uniquely tart, pleasant flavor that has made it popular as an ingredient in Asian sauces and soups like tom yum. More than just their use in the kitchen, kaffir limes are held in high esteem by practitioners of herbal medicine. 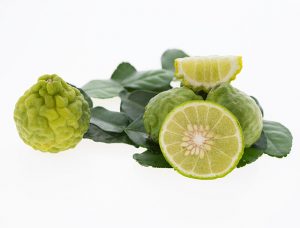 Kaffir limes possess a strong flavor that can be attributed to the concentration of organic compounds such as citronellol, nerol, limonene, and alkaloids. In addition to the flavor, these substances are responsible for the varied and impressive health benefits of kaffir limes. Citronellol and limonene, in particular, are notable for their anti-inflammatory and anti-bacterial properties.

The most well-known and widepsread medicinal use for kaffir limes is the maintenance of good oral hygiene. Rather than the fruit, however, it’s the leaves and rinds that are used for this benefit. Rubbing the leaves onto the gums can prevent bacteria from building up on the gums and teeth. Adding kaffir lime oil to mouthwashes and organic toothpastes can increase their potency.

Applying kaffir lime oil or leaves to areas with pain can greatly reduce the discomfort; consuming the fruits and drinking the juice will yield the same effect. This makes kaffir limes quite effective in reducing the symptoms of inflammatory conditions such as arthritis, edema, gout, headaches, and rheumatism. As a result, this greatly minimizes the chances of developing hemorrhoids as well.

Kaffir lime decoction can aid those suffering from constipation or indigestion by stimulating the digestive system.

The limonene and citronellol in kaffir limes are unappealing to many insects, so applying salve containing kaffir lime juice can reduce the risk of insect bites.

Kaffir lime oil has a place in aromatherapy for its soothing effects on the body and mind.

The combination of organic substances and volatile compounds in kaffir limes is believed to be adept at eliminating pathogens from the blood.

Kaffir limes possess antioxidant compounds that slow the breakdown of cells, making these fruits beneficial to the skin. They can minimize the appearance of pimples and scars, and leave the skin looking fresh and rejuvenated through repeated use.

Thanks to their antibacterial and antioxidant qualities, kaffir limes can boost the immune system by making the body less prone to infection.

Using kaffir lime juice or leaves on the hair is believed to strengthen the hair follicles and slow down the onset of alopecia or male-pattern baldness.

Ways to use kaffir limes

Kaffir limes are a common and popular ingredient in many Asian dishes, with the leaves and rinds serving as flavoring agents. Their powerful taste can overwhelm the flavors of a dish, so use them sparingly.

They can be used as a substitute for lemons in recipes that call for lemon juice or zest, such as bars or tarts.

Outside of Asian cuisine, kaffir limes can be added to many other dishes, such as ice cream, salads, custards, and curds.

Kaffir limes can support dental and digestive health, and boost the immune system. These fruits are believed to be good for the hair and skin too.