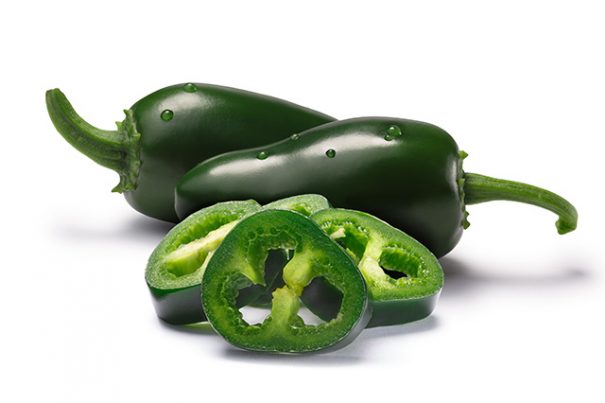 Jalapeño is a perennial plant that grows up to a meter in height and which sprouts small, white flowers after 45 days and green pepper pods after 60 days of transplantation.

It is picked and consumed while still green. Even though its flesh has only a mild flavor which is similar to a green bell pepper, capsaicin is concentrated in its seeds. On the Scoville scale (the scale that determines peppers’ pungency), jalapeños comes in at 2,500 to 4,000 Scoville heat units. To compare:  sweet bell peppers have zero units and Mexican habañeros have 200,000 to 400,000 heat units. 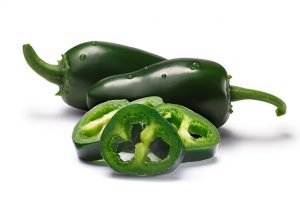 Jalapeños are sometimes known to ease headaches and migraines as capsaicin inhibits the proliferation of the Substance P neuropeptide, which is responsible for sending pain signals to the brain. Jalapeños can also be used to address arthritis, psoriasis, and diabetic neuropathy problems.

Jalapeños contain copper, iron, magnesium, manganese, phosphorus, and zinc, which all contribute to the maintenance of healthy red blood cells and proper bone development and nervous system function. It also contains antioxidants like vitamin A and flavonoids such as alpha-carotene, beta-carotene, cryptoxanthin, lutein, and zeaxanthin that handle effects of increased stress levels.

The capsaicin in jalapeños fights cancer cells. It also has antibacterial properties, which deal with bacterial infections like diarrhea and Staphylococci.

Jalapeño peppers get rid of complex proteins like fibrin, whose buildup can cause clots in the blood vessels.

Eating jalapeño peppers is good for your immune system as a single serving contains 66 percent of the daily recommended intake of vitamin C. The vitamin strengthens the immune system, protecting your body against various illnesses. Vitamin C also prevents the onset of deficiency diseases like scurvy.

The folic acid in jalapeños regulates the proper functioning of the nervous system. A lack of folic acid in your diet increases the risk of developing neurodegenerative conditions like Alzheimer’s and Parkinson’s diseases.

Ways to use jalapeños

Jalapeños can be used as add-ons to almost any kind of savory food such as pizza, burgers, tortilla, sandwiches, nachos, and fajitas, among others. However, these should only be taken in moderation, as they can cause a burning sensation in the mouth, throat, and tongue. Eating yogurt is a quick remedy to relieve burinng pain. You should also consider eating bread or tofu to absorb the capsaicin in the pepper.

Pick up on other tasteful jalapeño pepper recipes here.

Jalapeño peppers get rid of complex proteins like fibrin, whose buildup can cause blood clots in the blood vessels.

The folic acid in jalapeños regulates that specific amino acids undergo for the proper functioning of the nervous system.