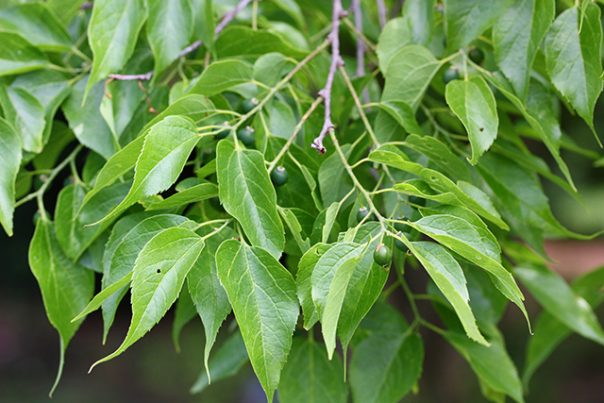 Hackberry, which has the scientific name of Celtis occidentalis, is a perennial tree that sheds its leaves annually and belongs to the flowering genus Celtis and the family Umaceae. Common varieties of hackberry include green cascade, magnifica, prairie pride, and prairie sentinel.

Hackleberry is called by other names such as Mississippi hackberry, American hackberry, beaverwood, netttletree, Northern hackberry, and sugarberry. It can grow from 40 up to 80 feet tall and can live from 150 up to 200 years. It is usually grown in abundance in some parts of Africa, southern and eastern Asia, southern Europe, and southern and central North America, but is available in almost every continent except Antarctica.

Its barks are grayish brown in color and has ridges and cocky warts. Its leaves are two and a half to four inches long and one and a half inches wide and are oval to lance-shaped. Its flowers are small and are greenish to yellow in color. Its fruits look like small berries are in season during the winter and sometimes throughout the spring season too, and turn from green to red or orange when ripe.

The Native Americans used hackberry fruits for folk medicinal purposes and for food. They pulverize the entire hackberry fruit and used it to make cakes and sweet bread, which served as their source of starch for long journeys towards the west.

They also used the tree for fuel during fire-burning ceremonies. The Kiowa tribe, in particular, used hackberries to make paste. However, nowadays, hackberry fruits are rarely eaten, although they are a big hit among the wildlife. Hackberry fruits cannot properly be considered as commercial crops; however, hackberry trees are planted for their industrial uses. 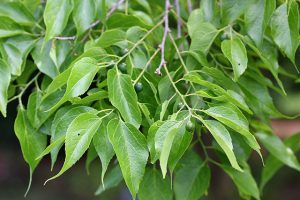 Hackberry has antioxidant and cytotoxic properties, as its leaf extracts contain bioactive compoundds that have tested positive for antioxidant activity that includes generating the superoxide radical 2,2-diphenyl-1-picrylhydrazyl (DPPH), which neutralizes harmful free radicals, thus preventing instances of premature aging and cancer, scientists who conducted a study into the matter concluded in a Scientia Pharmaceutica article.

Hackberry is good for the digestive system as it can be used to treat diarrhea and dysentery.

Hackberry is good for the female reproductive system as it can regulate menstrual periods.

Ways to use hackberry

As mentioned earlier, the Native Americans used hackberry for firewood. They still have that use today, plus a whole lot more – they are used to make furniture, boxes, fence posts, and plywood. They also serve as cover and are planted on riverbanks to prevent soil erosion and flooding.

Hackberry is also eaten, although how it tastes like is debatable. For a hackleberry jam recipe, visit this site.

Hackberry has antioxidant and cytotoxic properties.

Hackberry is good for the digestive and female reproductive systems.