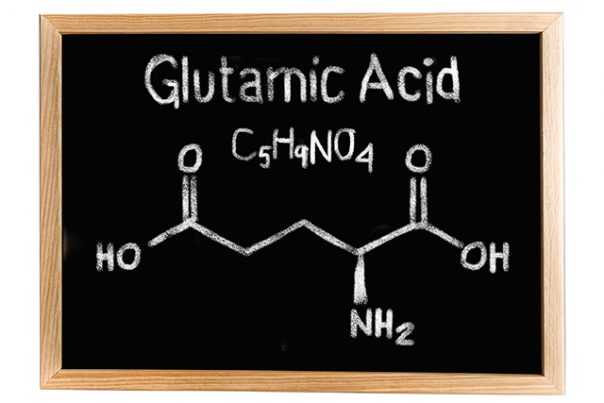 Glutamic acid is a non-essential amino acid, which means that these are protein-building structures that are naturally synthesized by the body. There is a misconception that the term “non essential” means that these compounds are not crucial to health, but nothing could be further from the truth. Of the 20 known amino acids, 11 of them are non-essential, with eight considered to be conditional amino acids. When the body experiences a large amount of stress, it is sometimes unable to produce enough amino acids to meet its needs. Glutamic acid is one such compound.

Glutamic acid is metabolized in the brain and is an important substance for healthy brain function. It was first isolated by German chemist Karl Ritthausen in 1866 but was only truly identified in 1890.

Glutamic acid works as an excitatory neurotransmitter. It directly influences how often and how fast neurons fire in the central nervous system. It is one of the few nutrients that are able to pass through the blood-brain barrier and is noted to be the brain’s primary food, other than glucose.

As glutamic acid enters the brain, it utilizes excess ammonia (a metabolic waste product) and converts itself to glutamine, which is another amino acid. This process seems relatively simple but it is a powerful detoxification act that ensures the brain is kept healthy and fully functional.

Medical studies point to glutamic acid’s use in improving intelligence, increasing mental clarity, and reducing the risk of developing neurodegenerative diseases such as dementia and Alzheimer’s. Health professionals design treatment plans around glutamic acid in their managerial programs for Parkinson’s, schizophrenia, muscular dystrophy, and fatigue. Some doctors even purport seeing significant improvement in the brains of patients who have alcohol-related neurological conditions when glutamic acid levels rise.

Glutamic acid is likewise used to detoxify muscle cells. The amino acid, a chemical messenger, is able to shuttle potassium (which is integral to muscle health) across the blood-brain barrier and into the spinal fluid. Intense exercise produces an overabundance of ammonia which slows down recovery and increases muscular fatigue. Glutamic acid “eats” the excess ammonia to become glutamine.

Data has also shown glutamic acid to act as an intermediary in the Kreb’s cycle, making it quintessential in the metabolism of carbohydrates.

For the most part, glutamic acid ensures proper brain function. It keeps us from becoming overtired, distracted, or mentally drained. A deficiency of this amino acid has been linked to a higher likelihood in developing neurological conditions such as dementia and Parkinson’s.

Even so, its inherent ability to convert ammonia into glutamine means that it can support the muscular system too. This prevents fatigue.

Glutamic acid is a non-essential amino acid that acts as an excitatory neurotransmitter which converts ammonia into glutamine. It is crucial for healthy brain function and prevents the onset of neurodegenerative disorders.