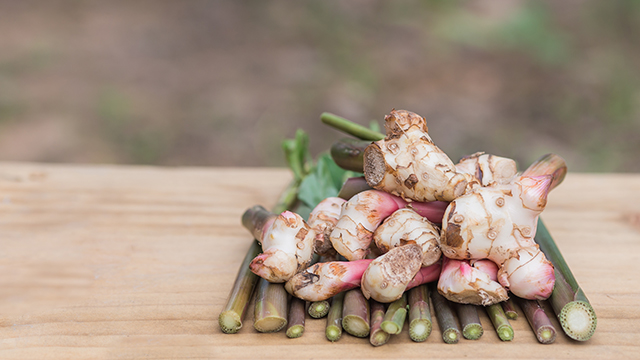 Galangal, which has the scientific name Alpinia officinarum and which belongs to the ginger family, is cultivated in Thailand, Malaysia, India, Southeast China, and Vietnam and is especially essential to Thai cuisine. It was first brought from Asia to England and northern Europe in the 13th century by the crusaders, and soon it became known as a popular spice as well as an herbal medicine.

Galangal, which is also known as Thai ginger or blue ginger, is close to the physical characteristics and uses of languas galanga (Alphinia galanga) and ginger (Zingiber officinale). Its dried roots (rhizome) have their uses in herbal medicine.

Galangal in Thai is “kha”. In Vietnam, it is “rieng”, and in India it is called “rasmi” or “Kolanjan”, “kulanjan”, and “sugandha vachi”, which all came from the Arabic word “qalanjan” or the Chinese word “liangtang”, which mean mild ginger. 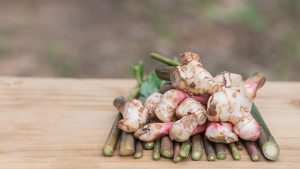 Galangal is a low-calorie, low-fat rhizome which can do wonders for your health, as a serving of galangal has around two grams of dietary fiber and only 45 calories.

Galangal can cure motion sickness, seasickness, morning sickness, or any form of nausea, as it has a fragrant smell that can help alleviate discomfort. For best results, drink galangal with warm water and honey.

Galangal can also be used to treat infections of the upper respiratory tract such as chronic bronchitis or severe cough. Root extracts from the galangal plant can serve as a mouthwash; you can also use them to gargle if you have gum inflammations or other mouth inflammations. Galangal is also used to treat halitosis.

Galangal is good for your skin as it contains many potent antioxidants that fight off free radicals that cause oxidative stress to the cells. Galangal promotes a healthy blood circulation and contributes to the removal of dangerous toxins in the body, which results in your skin being healthy and beautiful.

Galangal is also responsible for the formation of strong and beautiful hair. Applying galangal oil on the scalp can contribute to proper blood circulation – which in turn encourages hair growth – and can prevent hair loss and damage, split ends, and dandruff.

Galangal has many anti-inflammatory properties that make it helpful in the treatment of arthritis and other conditions caused by inflammation in the body. These properties are contained in a group of compounds called diarylheptanoids, which prevent the proliferation of nitric oxide.

It also has anti-microbial and antiviral properties that help in fighting against certain strains of Candida albicans.

Galangal can also help fight cancer as it directly kills cancer cells and boosts the ability of cells to fight off the disease. This is made possible through galangol – which is the oil obtained from galangal – acrid resin, and acetoxychavicol acetate.

Galangal is good for people who are afflicted with diabetes as it helps lower blood glucose levels.

Galangal is good for a couple that is trying to conceive, as it increases sperm count and motility.

Galangal is good for the heart. It helps in lowering high blood pressure, which can lead to heart ailments.

Ways to use galangal

You can incorporate galangal as a seasoning in many fish, meat, and vegetable dishes. It is also used as a tincture or decoction in powder form. Its recommended daily dose is around six grams.

It’s also pleasant to consume galangal in tea form and is used to add flavor to Polish vodka.

Galangal has anti-microbial and antiviral properties that help in fighting against certain strains of Candida albicans.

Galangal can help fight cancer as it directly kills cancer cells and boosts the ability of cells to fight cancer.

Galangal is good for people who are afflicted with diabetes as it helps lower blood glucose levels.

Galanga is good for a couple that is trying to conceive, as it increases sperm count and motility.

Galangal is good for the digestive system.

Galangal is good for the heart.