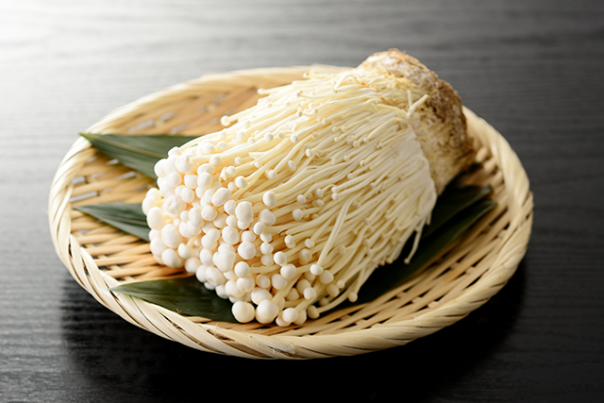 Enoki mushrooms, which have the scientific name Flammulina veluptipes, are slim and long and have small caps on one end, and are highly regarded as essential ingredients in Asian cuisines. They usually grow at the base of the Chinese Hackberry tree, but are also said to thrive near persimmon and mulberry trees.

Known as snow puffs, golden needles, enokitake, and enokidake in Japan, where they are abundant, endoki mushrooms are crisp and taste mildly sweet and fruity, and grow in bouquet-like clusters. Their mild flavor makes them absorb the flavor of the meals they are incorporated in. They are also native to China (where they are called jingu or velvet foot), Korea (paengi beoseot), and Vietnam (tram vang or kim cham).

Enoki mushrooms are usually colored off-white or light-brown to gold. The white ones (cultivated) are grown in bottles and are sold in supermarkets while the light-brown to gold ones (wild) have thicker stalks and are used in Asian appetizers, salads, soups, and stir-fries. Compared with other mushrooms, enoki mushrooms’ shelf-life is not long; therefore, it is essential that they are consumed upon purchase. 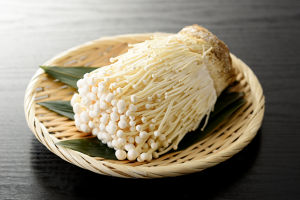 According to the United States Department of Agriculture, a one-cup serving (2.3 ounces) of raw enoki mushrooms gives around 24 calories, 1.7 grams of protein, and five g of carbohydrates, making them virtually fat- and sugar-free. Enoki mushrooms contain conjugated linoleic acid (CLA), which helps the body reduce fat, and thereby prevents the onset of type-2 diabetes.

The vitamin B1 (thiamine) in enoki mushrooms – equivalent to 10 percent of the recommended daily intake (RDI) – is responsible for the dissolution of sugars in the body, thus contributing to heart and nerve health. Potassium (seven percent RDI), while ensuring that the heart and its systems are properly functioning, is also an essential element in fluid regulation and protein synthesis.

The vitamin B9 (folate) in enoki mushrooms is good for your liver.

The vitamin B12 (folic acid) in enoki mushrooms provide for proper neurological function and DNA synthesis.

The vitamin B6 and zinc in enoki mushrooms are good for your immune system and for the proper regulation of glucose levels, ensuring that the body has the energy it needs to go through the day.

Enoki mushrooms are good for the digestive system, as they contain 30 to 50 percent RDI of dietary fiber per 300 grams. They aid in digestion and peristalsis – which refers to muscle contractions that facilitate the movement of food ton different processing stations in the digestive tract – and prevent indigestion and constipation issues.

Ways to use enoki

Enoki mushrooms are good for your liver.