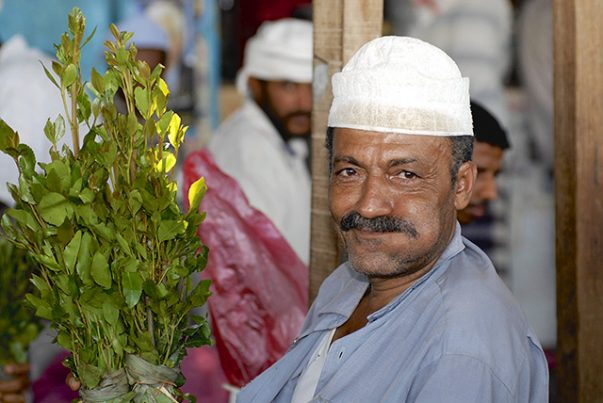 Catha edulis, more commonly known as khat, is a flowering, evergreen shrub indigenous to East Africa and southern Arabia. This shrub bears creamy-white flowers that appear in clusters, while its leaves are strongly serrated.

In Yemen and Ethiopia, Catha edulis is most widely used for the practice of khat chewing. This practice, which goes back thousands of years, is done to release the chemicals in Catha edulis leaves which are structurally related to amphetamines. In fact, Catha edulis is so popular in Yemen that Catha edulis cultivation remains one of the country’s top agricultural resources. It being a stimulative plant has caused it to become a controlled substance in the U.K., Germany, U.S.A., and Canada. 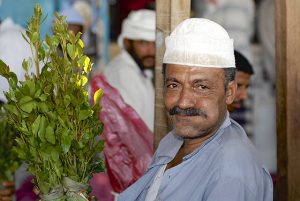 According to Herbpathy.com, Catha edulis is known to contain the following medicinal and nutritional constituents:

As a result, Catha edulis is notable as an effective analgesic, stimulant, antispasmodic, and antiallergenic. However, Catha edulis has teratogenic effects, meaning that it can interfere with the normal development of babies in the womb, so this plant should be avoided by pregnant women at all costs.

One of the most frequent uses of Catha edulis is to reduce fatigue and hunger, effects that have since been attributed to its cathinone content. This monoamine alkaloid is similar to amphetamines in terms of chemical structure, and is believed to be the primary contributor to the stimulant effect that Catha edulis has since become known for. Its anti-fatigue effect has been likened to a strong cup of coffee, hence why students, drivers, farmers, and other workers in the Arabian Peninsula and East Africa are wont to chewing Catha edulis leaves for added alertness, though this effect diminishes two hours after use.

Catha edulis is known to be habit-forming, however, and withdrawal symptoms will typically include the increased desire for sleep and mild depression. Moreover, the immediate the effects that follow Catha edulis chewing sessions will usually include insomnia, gastritis, and constipation.

Fresh Catha edulis leaves are believed to have an aphrodisiac effect, hence why some men mix these into their coffee to increase their sexual potency.

Catha edulis is often used as a folk remedy for respiratory diseases such as asthma and cough. In fact, different African countries have varied uses for Catha edulis, such as that as a treatment against melancholy and headaches in Ethiopia, as a remedy against gonorrhea by the Masai and Kipsigi.

When used infrequently, Catha edulis can be good for the body overall thanks to its energizing effect. Because it’s often used to treat respiratory conditions, it can be considered as good for the respiratory system too.

Ways to use Catha edulis

The traditional way to use Catha edulis and enjoy its medicinal effects is to simply chew fresh Catha edulis leaves. These are at their most potent when they’ve been freshly picked. They can be chewed without the inclusion of other substances, but drinking water while chewing is said to help the alkaloids enter the the bloodstream easier.

Catha edulis leaves and branch tips mixed with honey can be made into a bitter-tasting and mildly inebriating mead.

Catha edulis is most known for being an energizing stimulant whose effects against fatigue have been described as similar to coffee. It stimulates the mind and increases alertness, though these feelings ebb two hours after they first appear. It’s said to be good for the respiratory system as well because of its ability to alleviate the symptoms of related conditions.