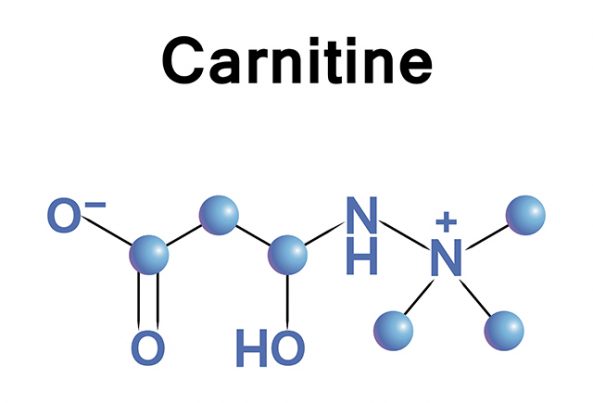 Every single amino acid, except for glycine, has two mirror-image forms of themselves: the dextro- and levo-, or right and left, respectively. The placement refers to the chirality property of the compound, which describes how either the D or L molecule interacts with plane-polarized light. In general, the L-forms, including L-carnitine, is the form that is more active. This explains why most data on carnitine refers to the amino acid as L-carnitine. There is, however, a subtle but important nuance between the two. This is important to understand, especially in the context of nutrition and supplements.

Carnitine and L-carnitine are chemically similar, causing an overlap in medical benefits. However, carnitine can be further synthesized into three forms, L-carnitine, acetyl-L-carnitine, and propionyl-L-carnitine. Each form is an entirely different supplement, with three distinct mechanisms and uses.

L-carnitine is used by bodybuilders who want to lose weight while increasing energy levels. It also serves to improve the immune function for those with a severe disease or genetic disorder.

Acetyl-L-carnitine is optimized for brain health and cognition.

All forms of the amino acid helps restore energy levels in the body and rids the blood of excess toxins. It works on a cellular level, meaning that carnitine supplements address diseases at the source rather than just alleviating symptoms. Carnitine is naturally produced by the liver and kidneys. It is stored in organs that use fatty acids as energy.

You can source carnitine through such food products as meat, fish, poultry, and milk.

Perhaps 90 percent of all data on carnitine focuses on its L-carnitine derivative. As previously mentioned, this form is often taken as a weight loss supplement. L-carnitine is a naturally derived compound, which implies its relative safety and usefulness. Numerous medical studies have suggested supplementing one’s diet with L-carnitine tablets to further weight loss. Because L-carnitine is a conditionally essential nutrient (meaning that while it is produced by the body, one can further boost mineral levels through food or supplements), vegans, or those with specific genetic disorders may have difficulty reaching adequate levels of carnitine in their bodies. To read a full discussion on the L-carnitine variety, make sure to look for its specific entry in this natural compendium.

In terms of carnitine itself, there are limited reviews on its medicinal uses. Purportedly, it functions as all its varieties. Thus, while it may aid in weight loss, it can also be used to reduce chronic fatigue caused by disease and aging, improve mood and cognition, and improve sleep quality.

A recent review on sperm motility and count among healthy adult males saw that carnitine directly impacted semen quality. Doctors now believe that carnitine can be used to help treat male infertility by providing more energy for sperm cells and reducing spontaneous cell death in the testes. Supposedly, carnitine supplements at a dose of 250 milligrams taken four times a day exhibited results similar to that of a varicocelectomy surgery.

Other implicated functions of carnitine include:

Carnitine appears to be an extremely versatile compound. Studies prove that it can support practically all body systems, from the heart and the liver to the reproductive system.

Carnitine is regularly confused with L-carnitine but while their benefits do overlap, the latter is a mere derivative of the former. Carnitine is a highly useful compound for overall health.