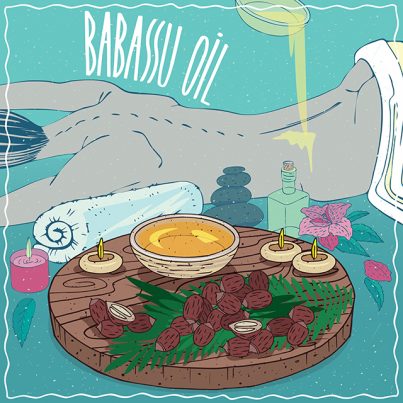 Babassu oil is extracted from the babassu palm and has a scientific name of Attalea speciosa. It looks pale and clear, like coconut oil. It does not have much aroma in it, but it may smell like coconut oil. The oil has a bland taste.

A French paleontologist named A.D. d’Orbigny discovered the babassu palm in the 1800s. The tree is widespread in Marahao, a Brazilian state. This palm tree can grow up to 20 feet tall and has several clusters of up to 500 fruits that look like small coconuts. The oil is produced by cold pressing the seeds of these fruits. It is made up of 70 percent lipids, with a high percentage of lauric and myristic acids. These acids give the oil its low melting temperature.

It is used for treating skin problems. It is a common ingredient in cosmetic products, such as lotions, creams, lip balms, and hair conditioners. Moreover, it is used for making lubricants, bulletproof glass, and explosives. 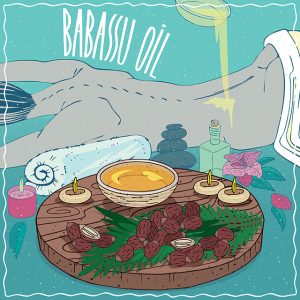 Babassu oil has several medicinal uses. One of these is it is used as an anti-inflammatory. Babassu oil is a composed of vitamins, acids, and antioxidants. It contains a lot of vitamin E, which is rich in antioxidants and anti-inflammatory properties. Lauric acid, the primary ingredient in babassu oil, makes up about 50 percent of the fats in the oil. It is an anti-inflammatory agent that can help soothe irritation, burns, bug bites, scrapes, swelling, and allergic reactions when applied topically to the affected areas of the skin. Moreover, it can be used to prevent acne and remove acne scars. Unlike coconut oil, it will not clog pores but will give the same skin-healing benefits.

Babassu oil is also an ideal remedy for premature aging because it can prevent the appearance of wrinkles, minimize scars and blemishes, stimulate the growth of new cells, and increase the elasticity of the skin throughout the years.

The integumentary system is supported by the babassu oil. It protects the skin and produces a cooling effect. When applied to the skin, it takes out the heat and creates a cooling effect. It forms a protective layer on the skin and can be used on all types of skin, as it does not make the skin greasy or shiny. It also removes stretch marks by improving the elasticity of skin.

It also strengthens the hair. The oil is known to strengthen hair strands and prevent breakage and split ends. The fatty acids that it contains form a protective layer that locks in moisture and makes the hair look healthier while stimulating new hair growth from your follicles at the same time. The oil also prevents the dandruff. Its anti-microbial properties keep the fungus and yeast, which are responsible for dandruff, under control.

Since babassu oil is rich in vitamin E, which is an essential nutrient for promoting skin and nail health, it moisturizes the cuticles and strengthens the nails.

Babassu oil or Attalea speciosa is extracted from the babassu palm. It is pale in color, tastes bland, and smells like coconut oil. The babassu palm was discovered by a French paleontologist named A.D. D’Orbigny in the 1800s. The oil is produced by cold pressing the seeds of these fruits and is made up of 70 percent lipids. It is beneficial for the hair, skin, and nails. It helps reduce inflammation, improve heart health, boost cognition, and has anti-aging properties.