Anise is a perennial herb that belongs to the same plant family as carrots. For centuries, the plant is cultivated for its aromatic and flavorful seeds that closely resembles licorice in taste. According to an article on HerbWisdom.com, anise is believed to be native to Egypt, Asia Minor, Crete, and Greece. The greenish seeds were once considered high-value commodities in ancient Greece and Rome. Today, the plant is cultivated around the world under warm conditions. 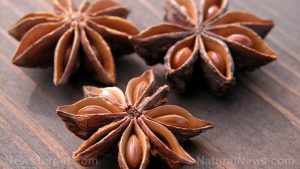 Anise is greatly valued for its high nutrient content. An entry posted on health and wellness website Nutrition and You lists the many essential vitamins and minerals found in anise, which include:

Like other medicinal herbs, anise is best known for its immune-boosting properties. The flavorful superfood is touted for its antimicrobial properties that help fend off a wide variety of bacteria, virus, and fungi. The ethanol extracts found in anise are known to inhibit the onset of bacterial infections and pathogens. Likewise, essential oils extracted from the seeds of anise are found to have the highest resistance against staph, e. coli and salmonella bacteria. Additionally, the herb’s antiviral and antifungal properties exhibit significant potency against candida and herpes viruses.

Anise is also valued for its beneficial effects on the body’s respiratory system. In fact, previous studies show that anise helps alleviate bronchial irritation and spasmodic asthma. Likewise, the herb is found to relieve recurrent airway obstruction. Aside from this, anise is touted to relieve various digestive illnesses such as nausea, diarrhea, and abdominal pain. The herb is also touted to prevent oral infections, bad breath, and gingivitis. Additionally, anise is known to help facilitate glucose absorption and regulate the body’s blood sugar levels.

In addition, anise supports the overall health of the nervous system. A previous study shows that taking anise oil helped mitigate the onset of seizures in animal models. Likewise, the analgesic properties of anise are known to alleviate migraines and headache. On the other hand, the herb’s anti-inflammatory properties provide pain relief that is comparable to aspirin or morphine. This is particularly helpful in patients with rheumatism, arthritis, and joint pain.

Moreover, the flavorful herb is notably effective in easing menopausal symptoms. In fact, previous research show that women who took up to three capsules of anise extract for four weeks exhibited marked reductions in the frequency and intensity of hot flashes. besides this, the herb is valued for its diuretic effects that rid the body of toxins and wastes.

Anise benefits the immune, digestive, nervous, and skeletal systems. Likewise, the herb is beneficial to the respiratory, urinary, and female reproductive systems.

Ways to use anise

Anise is commonly used as a strong flavoring for a variety of meat and poultry dishes. Likewise, anise can be used in salads, soups and starters. The herb can also be used in baked desserts such as pies and bars. Additionally, anise can be added to preserves, marmalade and different beverages. Online recipe curator Epicurious.com lists some of the most interesting dishes that use anise.